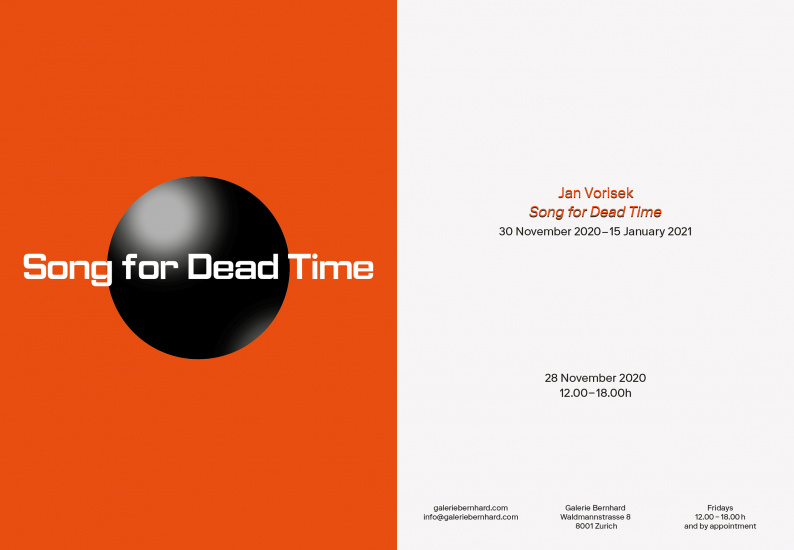 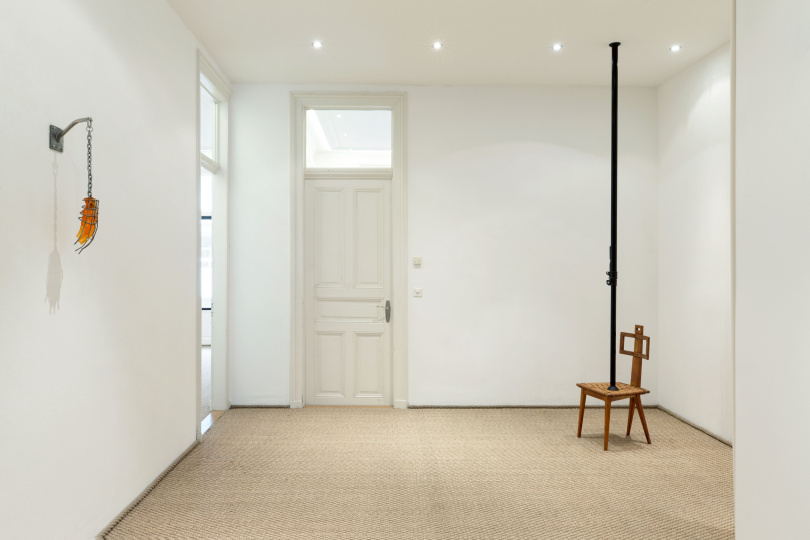 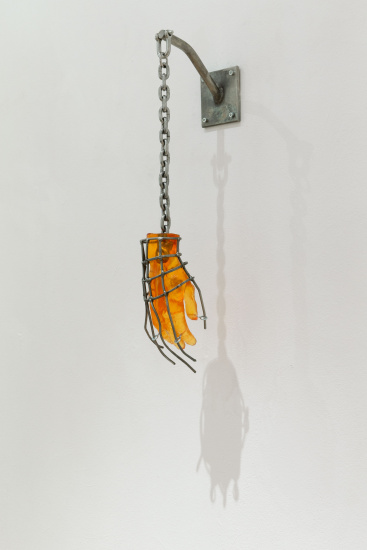 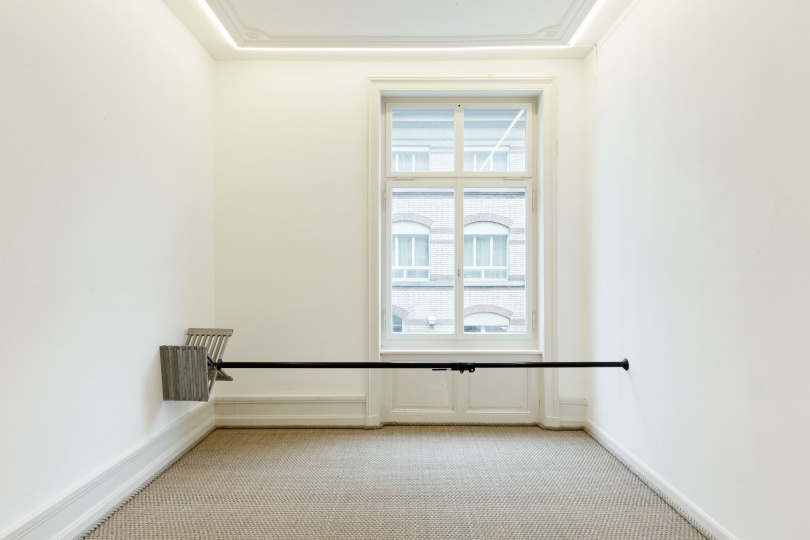 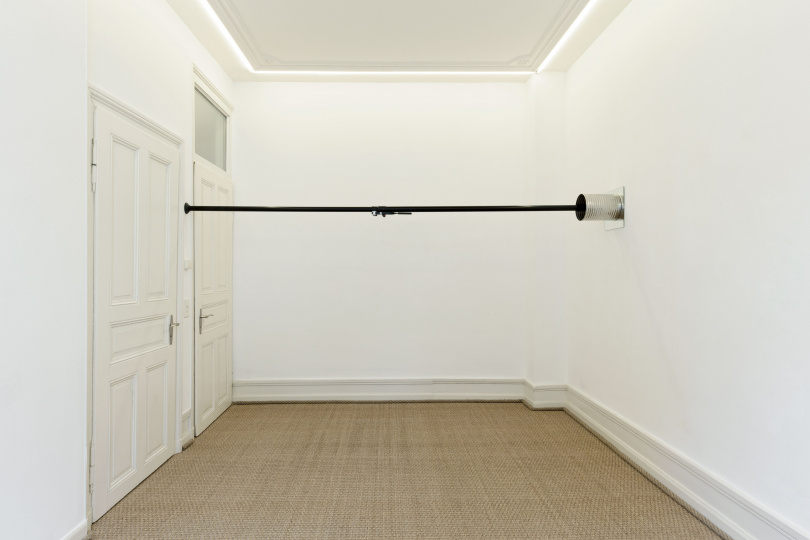 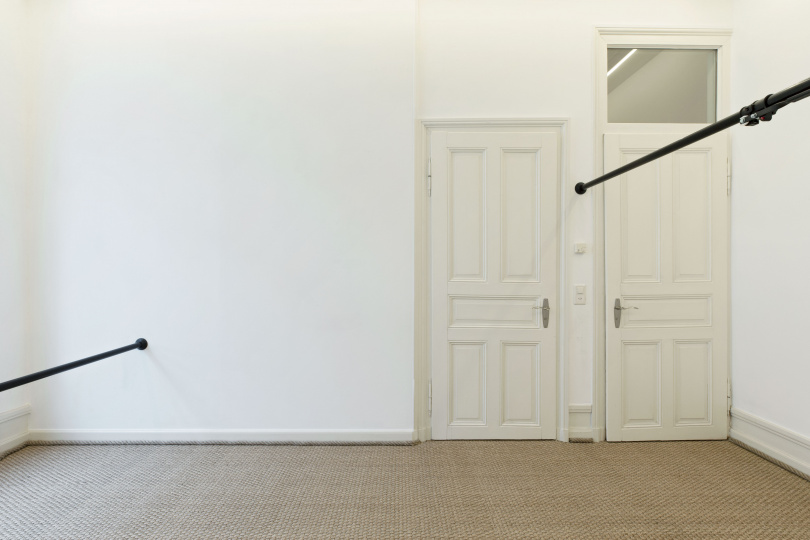 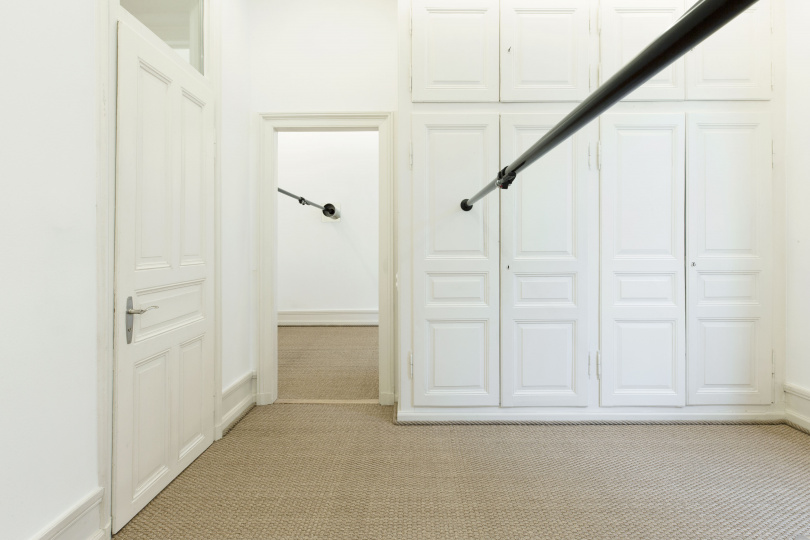 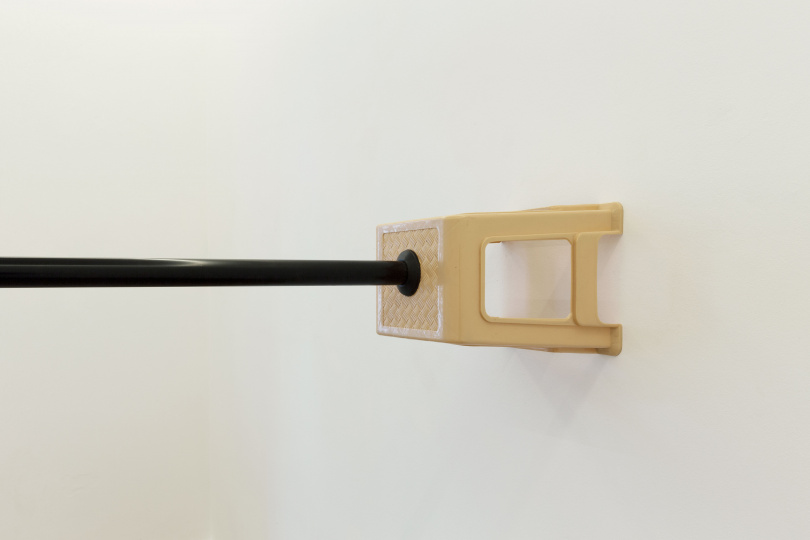 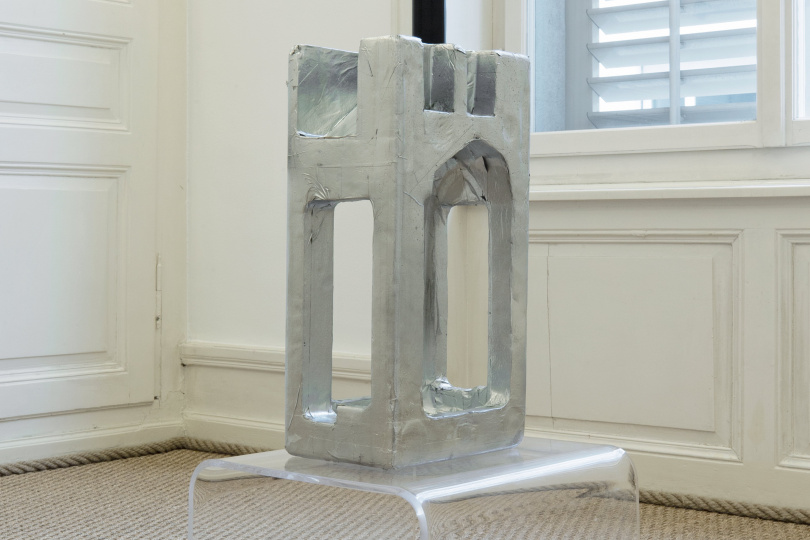 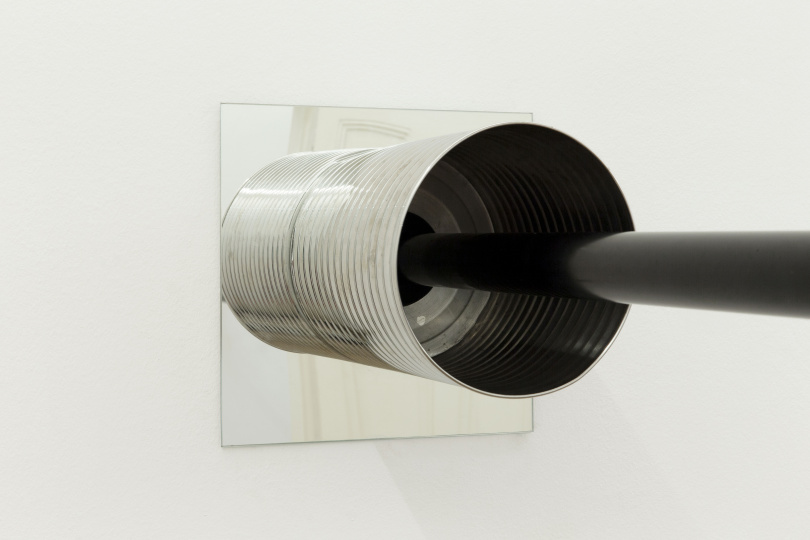 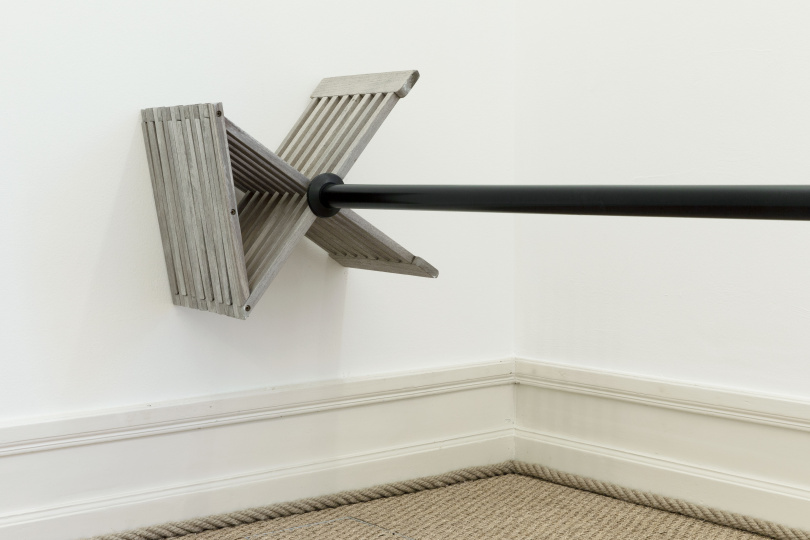 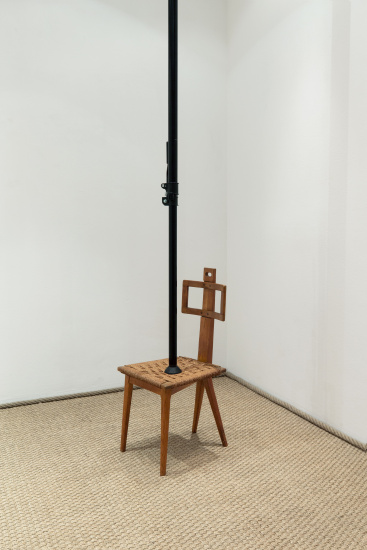 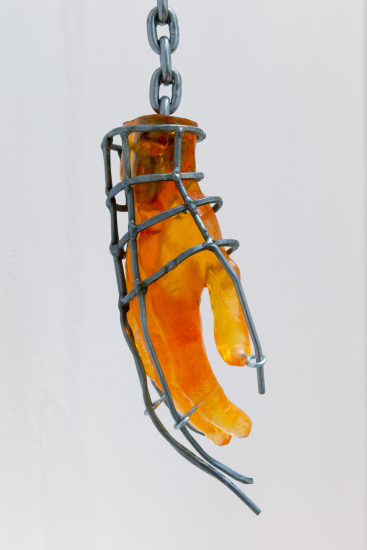 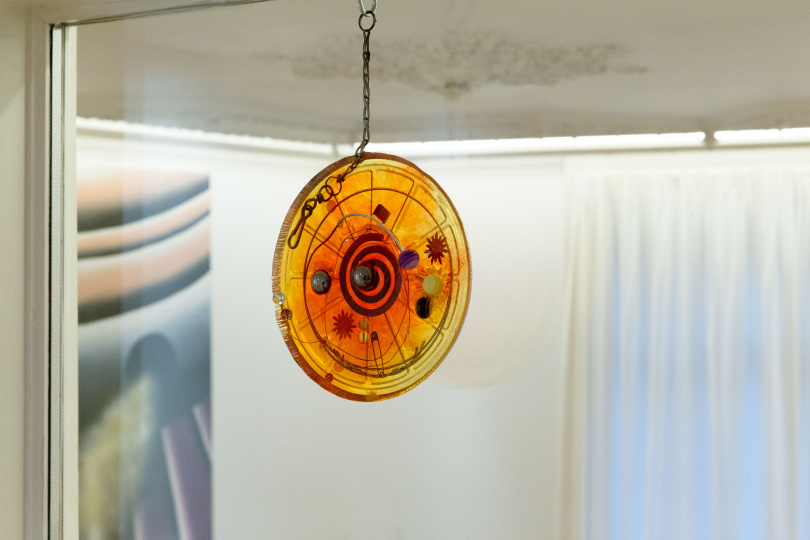 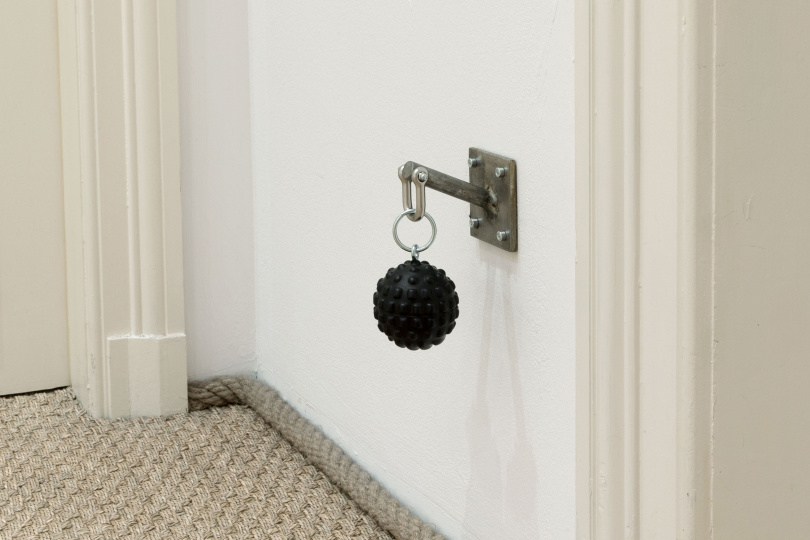 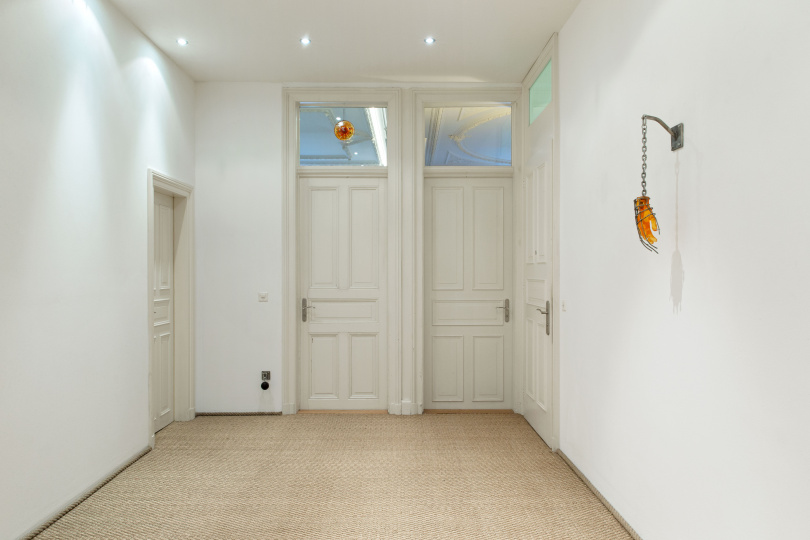 Galerie Bernhard is pleased to announce the second solo exhibition by Jan Vorisek, “Song for Dead Time”. Vorisek’s work takes place in the forms of sculpture, installation, performance, and improvised noise. His installations are often site-specific, and present commentary, ephemera, and documentation. For this exhibition, he developed a spatial installation which creates associations with, and assumes the forms of the human spine.

When I was a child in need of a back brace—a corrective corset—my parents opted instead to sign me up to play sports in a bid to strengthen the muscles around my spine and eventually, correct my bad posture. Now, years later, I sit at a desk in front of a computer almost every day. My scoliosis has returned. As screen-mediated activities become increasingly ubiquitous, the digital hand of a self-optimization reaches out to me: I should keep up with sports so that I can continue to sit in front of my screen.
The installation, entitled Song for Dead Time, 2020, place two formally extreme examples of restricted bodies and objects in relation to one another. They are constrictive, but also demonstrate potential for optimization and work, and perhaps also pleasure. The nature of the objects in this show—chairs, stools, and tension poles—suggest the expansion of bodies, the space they can potentially occupy, and the limits of their expansion. As if pressed against the outer walls of the gallery space by an invisible centrifugal force, the readymades are originators as well as recipients, pulling and pushing forces in action. Whereas some of the installations effectively function as room dividers, others become fixtures, pieces of furniture, repairs aides, things stowed away. Some of the gallery’s cabinets have become inaccessible, having been forced shut. Performing its own immobility, Song for Dead Time is a silent participant in a system of protrusion and inversion.
The Radiant Pressure That Shimmer Retention Gasping Apart The Agonal Frazzled Memory Fading From Interior Energy, 2020 demonstrates the process in reverse. A metal structure encages an amber hand like a piece of exoskeletal structure. Cast from resin, the colour of which is reminiscent of bodily fluids, it is the only formally identifiable “body” in the show. Suspended from the wall, this object can only be recognised as such: an object. But where a chair touches the floor, the pole becomes a bodily substitute; a body that is only spine, only held upright.
Just as one only really notices something once it goes missing, you only seem to notice your spine when it hurts. Its curved shape —a concession to remaining upright—is intended to cushion walking, a rather harsh gesture that implicates the entire body.