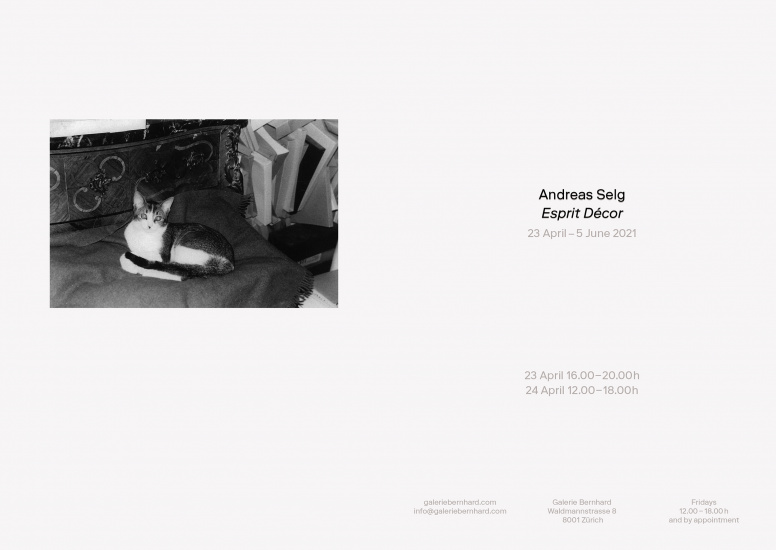 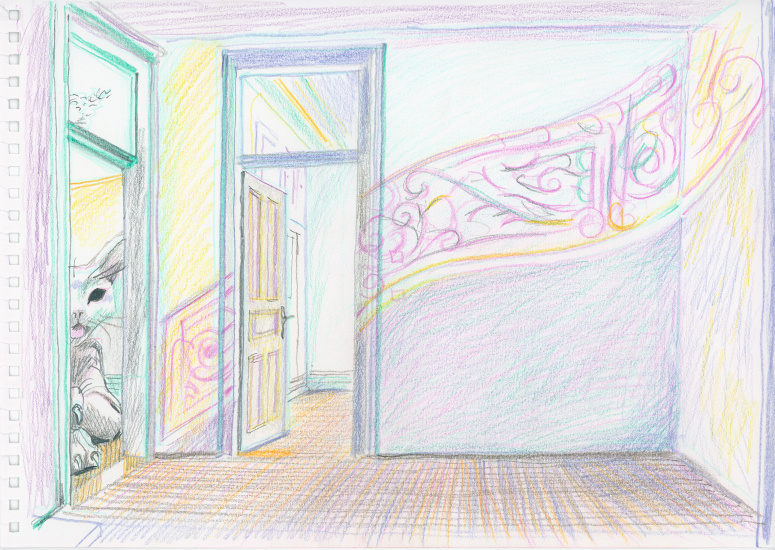 Andreas Selg, To Expound Other Doubts, 2021, Projection, with Bernhard Hegglin 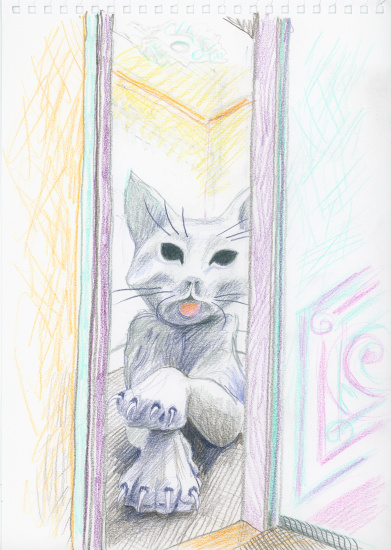 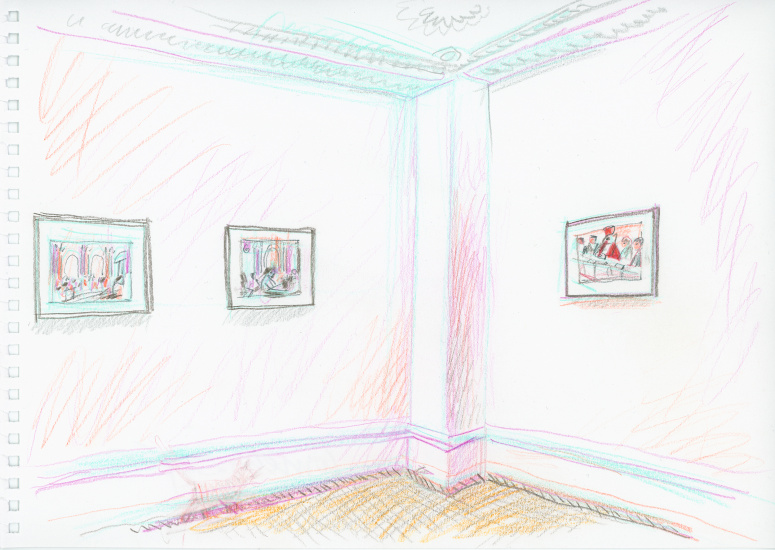 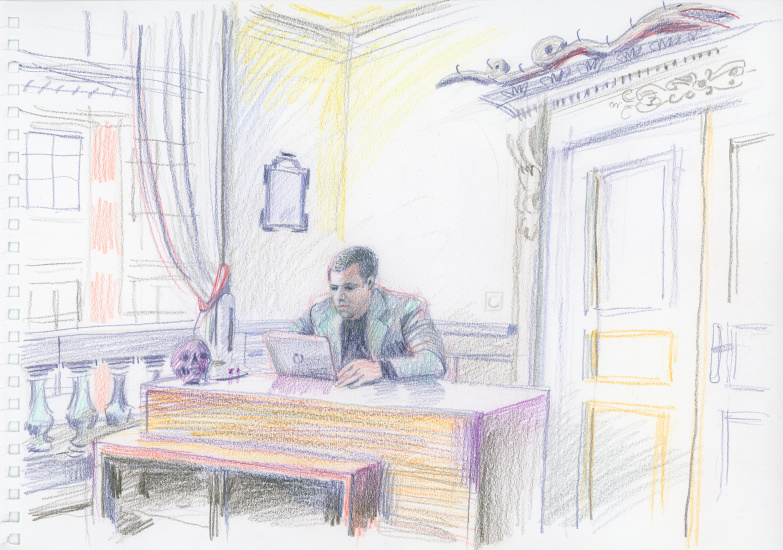 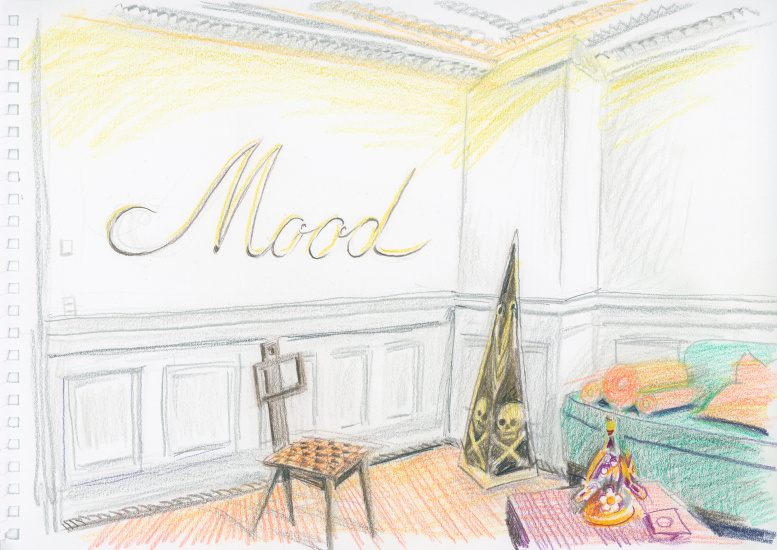 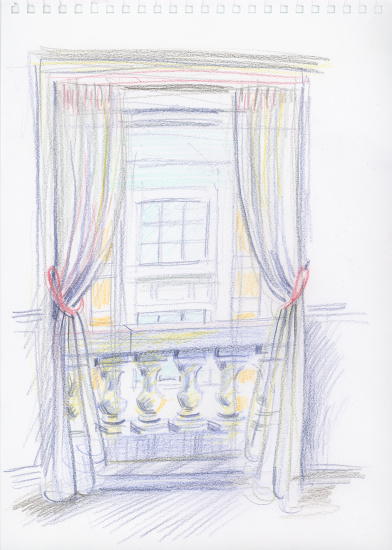 If to dwell is to leave traces, in the interior these are only accentuated. The traces of the inhabitants are imprinted in the interior. Enter the detective of a story who pursues these traces.
FADE IN:

Establishing shot.
Camera slowly tilts from a bustling street scene up a building with an art-deco façade to a cloudless blue sky.

‘C’ Lounges in an armchair behind a desk in the corner of the room. A record player plays. AUDIO: VIVALDI, CONCERTO IN A MINOR FOR TWO VIOLINS, STRINGS AND CONTINUO, RV 523:1, ALLEGRO MOLTO.

Reverse shot, POV - ‘C’.
‘C’ Looks across the room at five characters in conversation. Scrawled in marker above ornate wood paneling: “A MINORITY WITH THE RIGHT IDEAS IS NOT A MINORITY.”

...European revolutionaries. Babbling to themselves in a bourgeois apartment – lengthy diatribes, ecstatic hyperbole, visceral images and accusatory phrases. All at arm’s length from the proletarians who, far below, are the subjects of their concerns. These six young individuals, united by their shared resentment of prevailing social and political conditions, have come to form a commune. Looking out of the window they gaze upon their subjects, on whose behalf they wish to affect an unbridled, all-encompassing revolutionary change.

‘A’ HEARD OFF SCREEN:

An actor?
Yes, yes, I’m an actor.
It's hard to say.
I’ll show you something.
It's an idea of what theatre is.

The very walls of this apartment reflect the cultural and structural integrity of our protagonists. It is the material and intellectual backdrop in front of which they perform. A hermetic space, a hiding place, a headquarters. This membrane protects them from dangers outside. A cell in every sense of the word, even if the irony is lost on them. And they too carry a specific room inside them, identical to the one they occupy. A mise-en-abyme: bourgeois reality trapped within bourgeois sensibility. Thus, the morale of our infantryman, the ‘Esprit de Corps’ of the soldat en manoeuvre doesn’t lie in the body, but in décor. Interior becomes interiority.

Window shot, down angle, slow zoom on street
Camera looks out the apartment window down onto the street activity below. A cat crosses the road and enters a building.

They are almost indiscernible, those cats and these actors. Comically, they imagine themselves invisible while desperately wanting to be seen. They station themselves with a perfect sense of pictorial composition on cushion tops and rugs. Symmetrical, haughty, solitary, not once shedding their despotic air of opulence and indolence. Arbiters of elegance. Connoisseurs of comfort. The undetectable detectives of their own film noir. But for one distinction: cats can take to the street. If our revolutionaries set so much as a toe out that door they would face a defeat so swift it would be noticed by no one but the cats. Be it on sills behind windows or under cars and in gutters. No one goes.

Then one does. No one sees him leave. He slips into the night keeping to the curbs and fences, a shadow’s shadow. An unease grips him. Instinctively, he balls a fist in his pocket causing a sharp pain to jolt up his arm and a shrill note to ring in his temple. A hallucinatory miasma enters him. He spins and salivates until it cripples him. He fills his lungs and howls. He draws from the idol he is becoming. An incomprehensible, trembling voice addresses the night. "What is happening?" says this voice. "The spirits with which I am usually in communion have all disappeared. Where am I now?” it says. Then, louder: “I hear a monstrous voice by which I say what I say without knowing a single word of it. I think and my thoughts are as useless to me as a hair standing on end. My face feels as large as a spirit's face, with a smooth, insipid tongue, a deformed nose incapable of prophecy and enormous blind eyes which cannot see inside myself!” Then, in a whisper: “Horror alone penetrates me.” I turn around, I can’t say why, but my face starts to cry like a terrible beast. It continues: “I think and my thoughts are as useless to me as a hair standing on end! If I still had any hair, I would feel it standing all over my body!” I don’t have the means to experience the fear I sense. I turn for the apartment. My coat is splitting. This feeling is unbearable. Then, in a harrowing cackle: “I am dead, annihilated. This head, my head, no longer sees me – I am gone!” It begins to meow, forcing out from deep in its chest the same raucous cry by which cats make it understood that they are sacred animals. I look at myself and cannot perceive myself. Nor my surroundings, all is blurred before it comes back into focus. The camera has moved. It is under the frame of a door and peers into a cold, dusty little room where it slowly zooms in on an empty chair. I scan this room which is closing up around me. I see a man in the corner, himself a cat, and hear him scratching the ground with his claws. I notice small marks gouged into every last inch of the paneling and wallpaper. Tally marks. Evidence. The camera slowly tilts up to the ceiling and traces the stucco decorations calligraphically. I have become a cold, feeble cat. I am surrounded by the ghosts of long dead, spidery dwellers who have secluded themselves for too long only to wind up caught in their own webs, the protagonists of their own epic narratives. Exsanguinated corpses. Scratches: their legacy. If to dwell is to leave traces, in the interior, these are only accentuated.