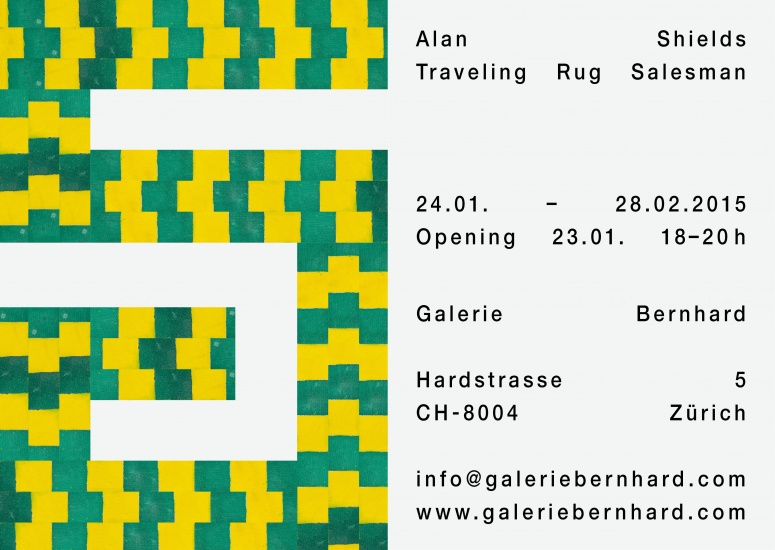 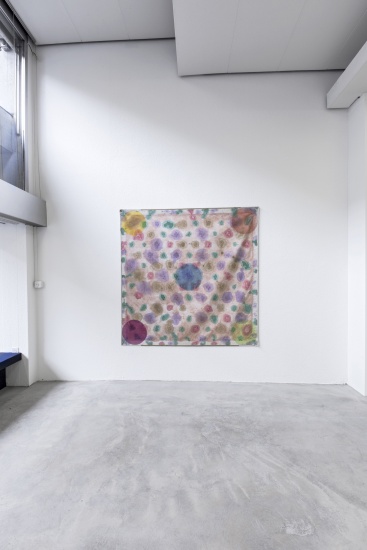 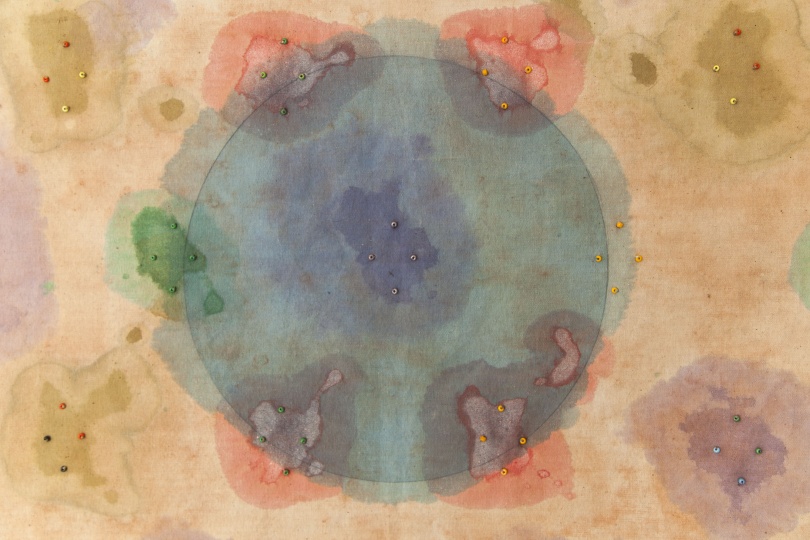 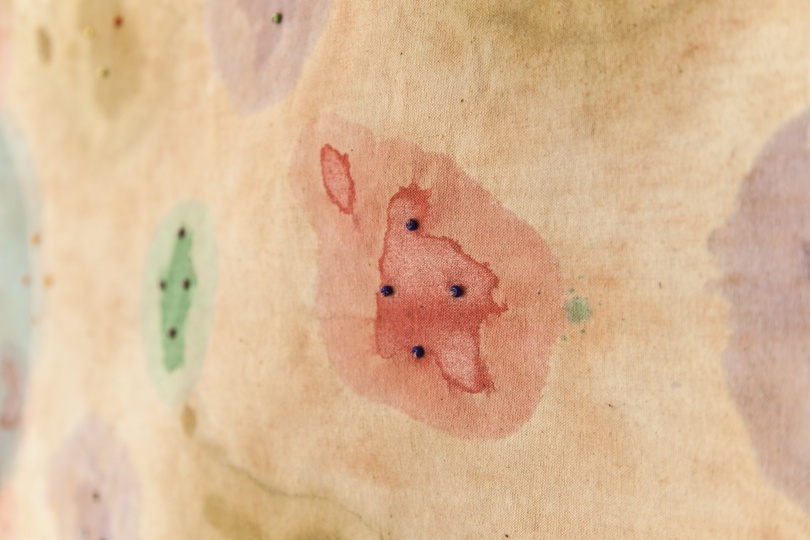 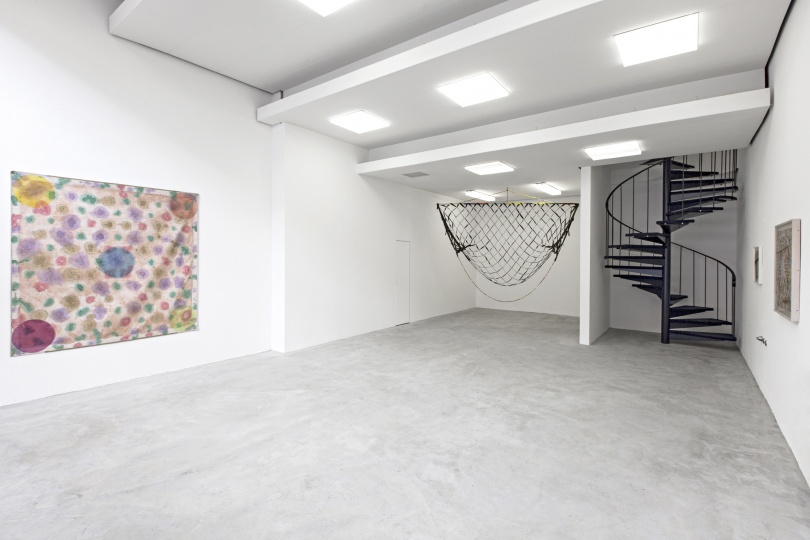 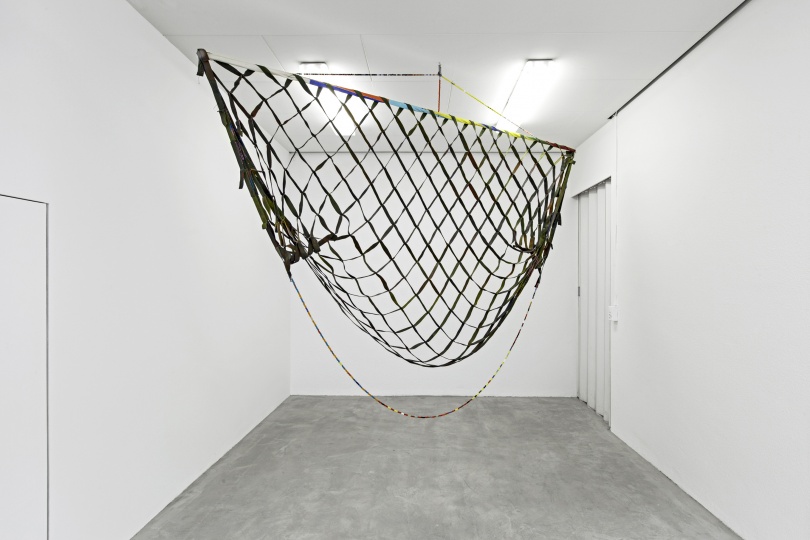 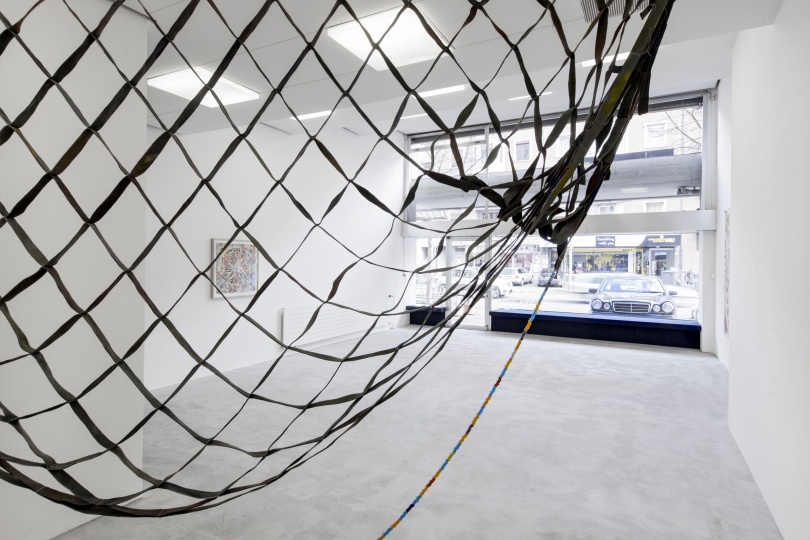 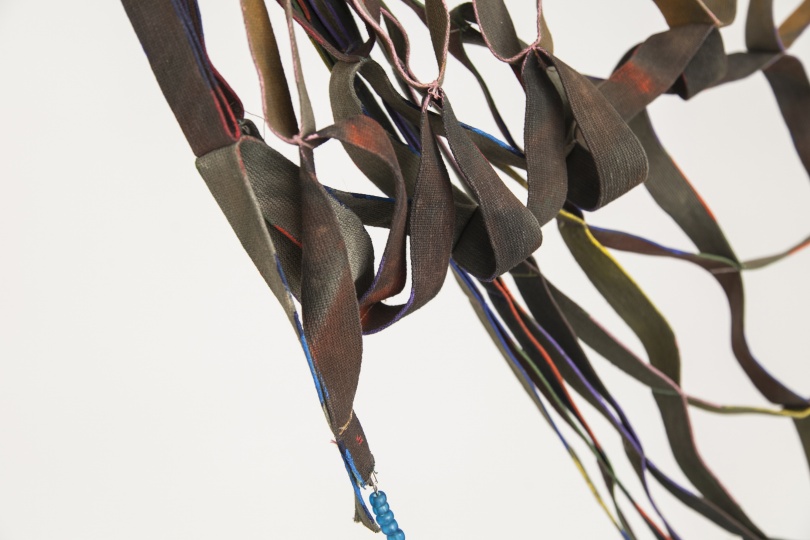 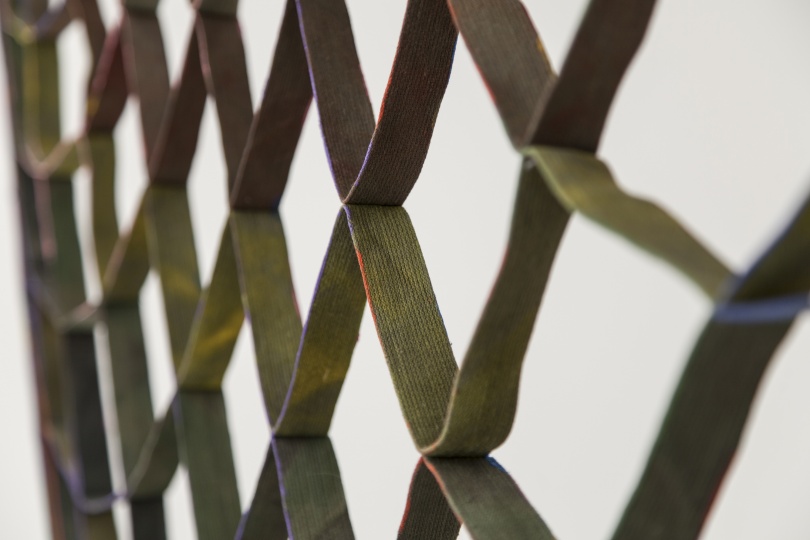 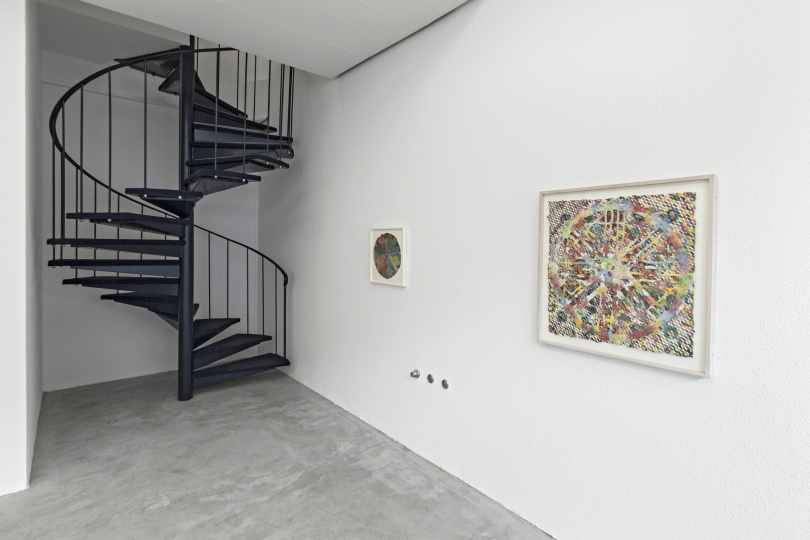 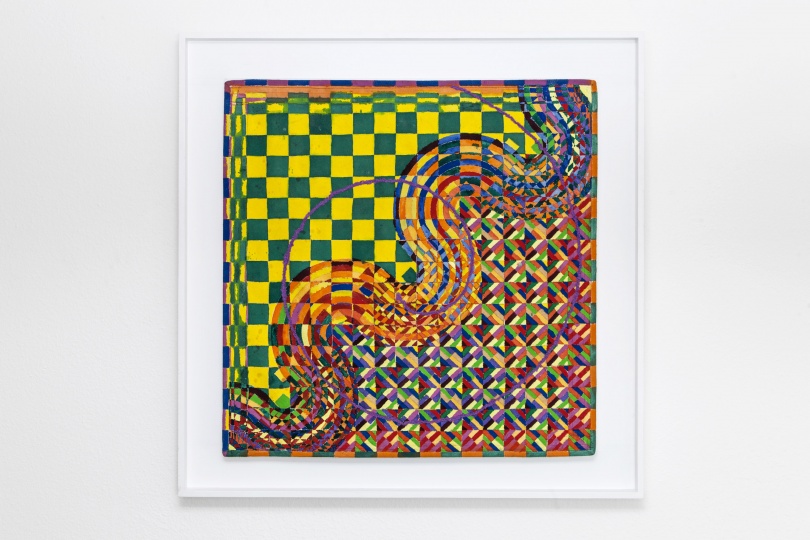 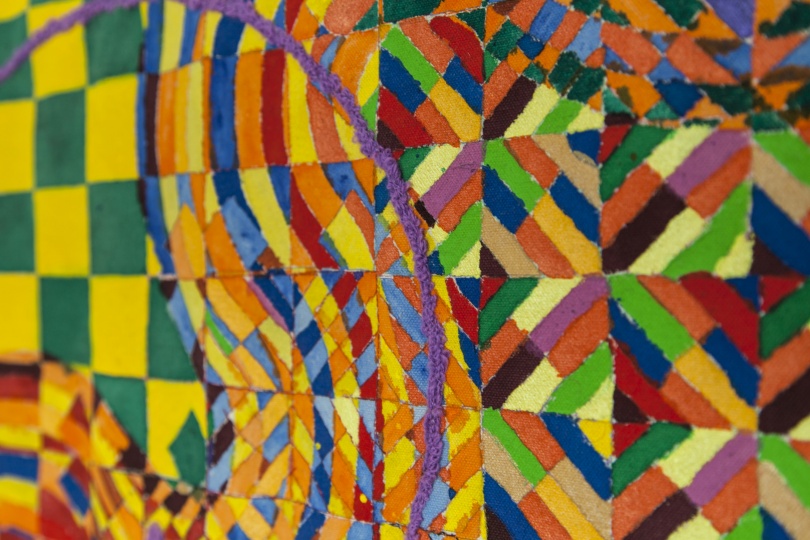 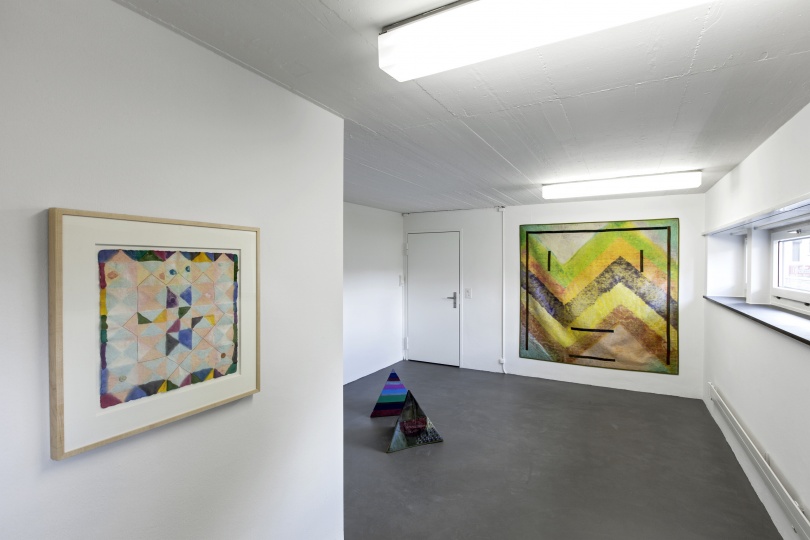 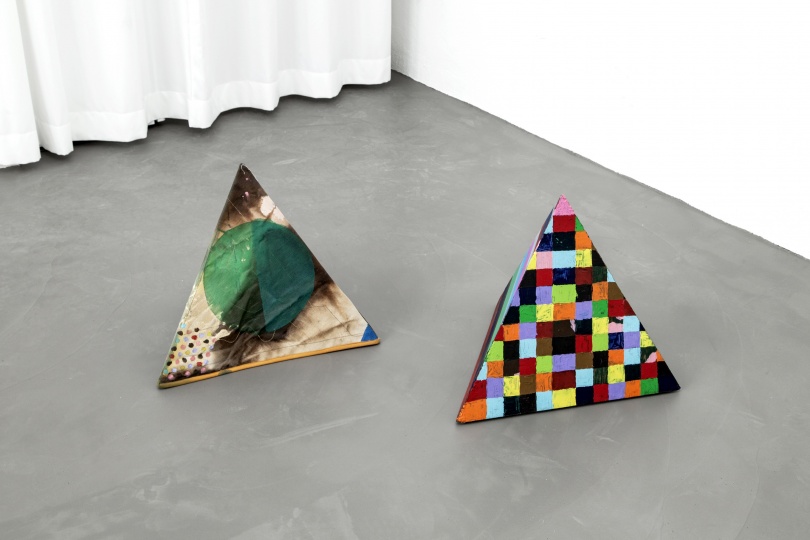 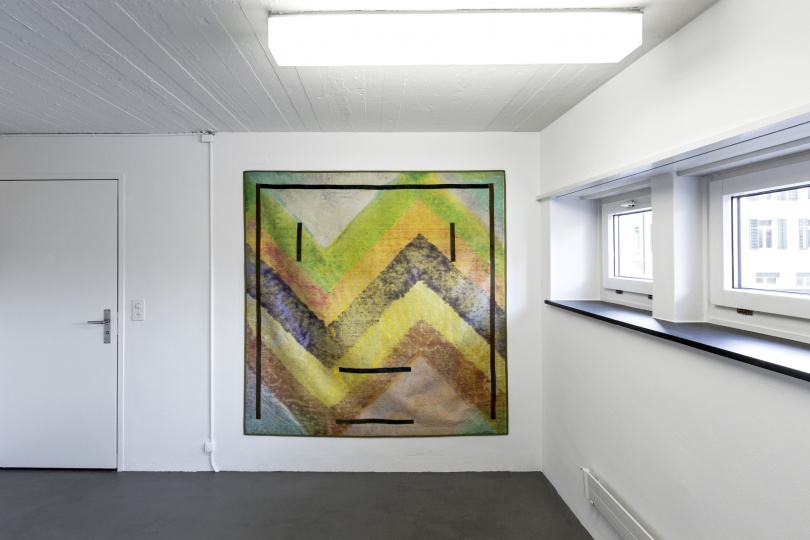 Look at it and make up your own mind as to what it is. I don’t always know, I really don’t care, and if I did I would lie about it in order to defend my own chance in creativity. If you can’t see, reach out and feel it with your elbow. (Alan Shields in Arte Milano, 1972, p.14)

Part of the magic of making art, or anything that excites the viewer’s eyes, has to do with primitive feelings. (Alan Shields in Alan Shields, Deborah Emont Scott, p.25)

Galerie Bernhard is pleased to announce Alan Shields’ first solo exhibition in Switzerland in 31 years. The show will consist of a cross section of works from the three decades of the 70s, 80s and 90s.

Alan Shields (1944 – 2005) worked in the wake of New York 60s Minimalism, honing and adapting his materials and techniques in painting, environmental installations, and printmaking with patient persistence while maintaining a conscious availability to unexpected results.

Shields started making threaded canvases in 1968, the year he moved to New York. They consisted of unstretched canvases, usually large, in which he sewed colored threads. Some of the canvases were blank, while others had stained acrylic areas that contrasted with the colored threads. Some of them had a grid as a recurring motif. When he first did these paintings, Shields, in addition to making art, was involved in theater, working with sets.

He moved to Shelter Island, NY in the early 70s, but remained proud of his family’s deep, Midwestern farming roots. Practicality was the mother of much of his aesthetic invention—such as the portability of unstretched canvas or the use of stenciling to recycle compositional forms in his painting and paper, as well into his printmaking. His machine-sewn colored threads operate as drawing details in many works such as Flakey (1975), Colors in Clay (1988), but they also secure the grids of woven fabric tape. The duality of farm life—the extreme uncertainty of nature and crop outcomes versus the unrelenting multitude of small, endlessly repeated daily tasks—could be seen as the underpinning for the compositional device common to many of his large works, juxtaposing cosmic scale with a uniform dispersal of very small remnants of paint, repetitively printed forms, or, in the case of In Bed the Sty is Teacups (1976-77), a large web of rope, string, and beads.

Process and making have always been visible, crucial components in his diverse works. “The easy flow of one medium into another in his art is not a big deal to him; it’s done with ease, as part of visual and ecological idea in which materials are recycled in an ever growing repertoire that defies closure” (Artforum, March 1986, p.6).

Shields’ painted works would often take object form, occupying and displacing space, having insides and outsides, fronts and backs, surface and volume. They would hang from the ceiling. They would be freestanding. “At times they might be what you bumped into when you stepped back to look at a painting hung on the wall. With Fuller’s geodesic dome structures in mind, we can more appreciate the fact that rather than painting an illusionistic grid on a flat canvas support, Shields, who had studied civil engineering in his 20s, physically constructed grids from painted canvas” (Something Goin’ On & On, Bob Nickas, 2011, p.9).

Between 1971 and 1974 he made more than 30 print editions. He approached printmaking like paintings by giving the matter of process the same unshakable focus. When asked about the differences between print and painting in an interview published in 1974, Shields brought up the farm in his answer. He said: “ It’s the same process. I guess probably they affect each other back and forth. I think I treat them equal – I try to treat them both with honest concentration. There’s no favoritism. I’m against favoritism in working in art. I don’t even have a favorite color. It’s just like farming. It’s good to rotate crops. It’s good to change media” (The Print Collector’s Newsletter, 1974, p.18).